This morning we headed downtown to Canada Place with the boys for the last day of the LEGO® Imagine Nation Tour in Vancouver. It was a gorgeous fall morning and the waterfront views at Canada Place were stunning as usual.

The first ever LEGO® Imagine Nation Tour features over 2.5 acres of amazing interactive play experiences, life-size LEGO models, Brick Pits, Master Model Builders and more. The next and final tour stop will be October 14-16 in Toronto, at the Metro Toronto Convention Centre. The boys are both huge LEGO fans and they had a blast visiting the different areas and building whatever they wanted. There were SO many LEGO bricks available to build in each area. A LEGO lover’s dream!  We also had the chance to admire and take photos with life-size LEGO models like Star Wars characters, Superheroes and more.  There were also cool digitally-enhanced areas where you were able to bring your LEGO creations to life on the big screen as children built their LEGO NINJAGO™, LEGO Elves, or LEGO Friends themed models, scanned them into the game and enjoyed a thrilling, immersive 60-second experience featuring their own custom creation. So cool Some of the areas available were:

We had a great morning LEGO brick-building for a few hours and the boys left with some LEGO samples and a cool LEGO Star Wars poster that is now up on our son’s room. If you are in the Toronto area and love LEGO then I highly recommend you get your tickets for the Toronto tour asap. We are really hoping they make it a yearly event as well! 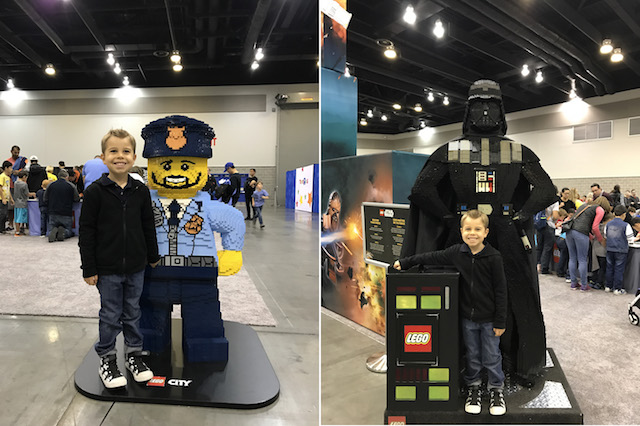 You can visit LEGOImagineNationTour.com to learn more about the tour, to explore dates and session times, and to purchase tickets.

Disclosure: I was gifted tickets to the show for review consideration, this is however not a paid post and all opinions and views on this post are 100% my own.

END_OF_DOCUMENT_TOKEN_TO_BE_REPLACED