I am very guilty of spending too much time on my phone. I am also aware that the verdict is still out regarding any negative impacts that small technology can have on developing brains. As a result, I am constantly trying to check my phone like a ninja and stealthily hiding it in my pocket, so my toddler doesn’t spot me and yell, “See Ellie! See Ellie!” the little narcissist that she is. When we were given a VTech Rock & Bop Music Player to test drive, I thought it might be a great compromise. 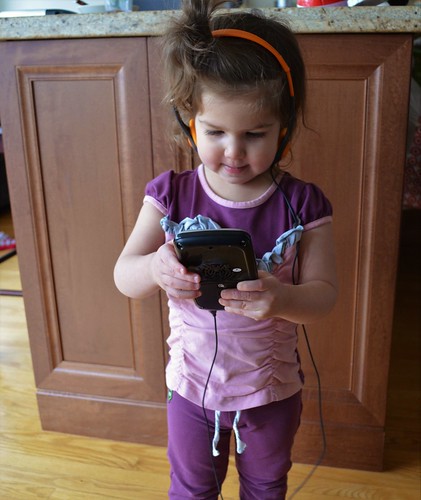 The Rock & Bop Music Player has:

I like a lot of things about this cool little toy. The price point is pretty fantastic. At approximately $19.99 CDN there is little fear on my part that my toddler is going to ruin my insanely expensive technology and if she happens to drop it (which has happened a number of times), I am not going to cry if it isn’t working again. It also comes with child- friendly headphones (can’t be set too loud) which are a bit big on her, but she has a pretty teeny head for her age, so that wasn’t surprising. The songs are ones that she is somewhat familiar with so they were pretty engaging for her, and she was able to figure out how to turn it on and select an “app” right away. I do wish there were more than two volume settings as the player works without the headphones as well and I could do without Froggy Went a Courtin’ playing over and over again beside me. But this is a minor issue overall. 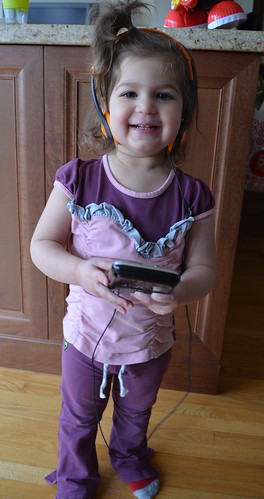 My kiddo also loves to walk around pretending it’s an actual phone as well and has many a conversation with her grandma and her grandma’s best friend in Vancouver, which is very entertaining. I have been a fan of VTech toys since my son was little but we haven’t purchased any in quite some time as we have all of his older items which are still in great working order (some are as old as six years now). I think this also says something about the quality of the brand since I have an “if you break it, it goes in the trash immediately” rule in this house.

If you are in the market for a fun and inexpensive toy for your approximately 2.5-5 year old, I think this will most certainly fit the bill. There is also a French version of the toy that is sold separately, and I think this is a great option for any kids in immersion preschool or kindergarten to reinforce the language in a fun and engaging way. 2 AAA batteries are required but are included so you can use your Rock & Bop right out of the box. The Rock & Bop is widely available online at many major retailers. 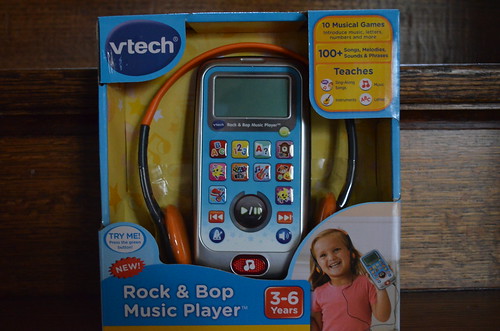 Disclosure: This is a partnered post with VTech. A product sample has been received for this review, and all opinions and views on this post are 100% my own.

END_OF_DOCUMENT_TOKEN_TO_BE_REPLACED

« Previous PostSpring Break Cash Giveaway: Enter to Win $200 via PayPal
Next Post » Online Energy Tools to Keep on Top of Your Electricity Use