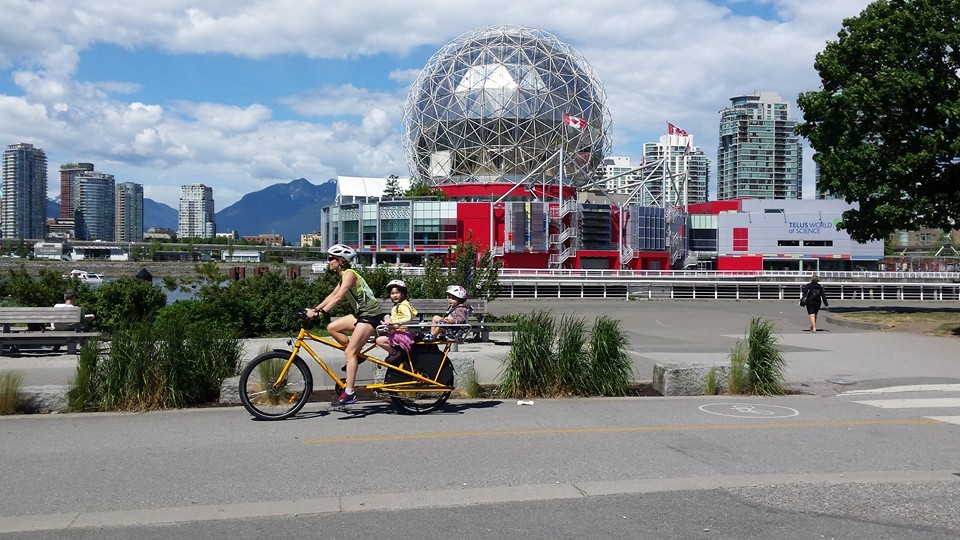 I live in Vancouver, Canada. This place is made for cycling. We have a world class system of bike lanes and weather that’s mild all year. When it was just me and my youngest, I had her in a front-mounted bike seat. We both relished the uninterrupted conversation time while whizzing down the street. But then she got too big. And then she got a little sister.

So I stuffed them both into a bike trailer and kept pedalling. For the most part it was fine. They had each other. But I felt disconnected. I’d literally have to stop the bike, walk back and lift the flap – only to realize they were just pointing out a seagull flying overhead. I also felt uneasy about them traveling so low to the ground and far behind my bike.

It worked for a while until they both grew wider than their seats. At this point there were certainly times where I was glad I couldn’t really hear them. My five-year-old was not quite big enough for a trail-a-bike and would still fall asleep from time to time and my two-year-old still needed a baby seat. That’s when I started researching less conventional options.

Enter the Yuba Mundo V5: the luxury minivan of bikes. We have a lot of hills in Vancouver and I didn’t want something that rode like an apple cart. A cargo bike seemed like the best bet. From there, Yuba was the easy choice: it’s affordable, it’s stable and it’s made for exactly what I need it to do (carry my kids).

I did consider a long tail adapter kit because I already own a stable high end touring bike but based on my research the adaption kit made the ride feel disjointed and like it was about to snap at any moment. That sounded like a pretty unpleasant sensation when carrying kids. In comparison, the Yuba Mundo feels anything but. If you like a stable, floaty ride, this bike’s for you… and your wee ones (or lazy husband for that matter – this bike carries up to 440 pounds). The Yuba Mundo is no lightweight at 44 pounds of bike plus 65 pounds of kid. Somehow though, the Mundo is very stable and yet seems to float. At speed, you hardly even notice the weight. One caveat is that my untethered 5-year-old can rock the bike when flailing… so I sometimes have to remind her to sit tall. My strapped down 2-year-old however can thrash about wildly without affecting the bike in the least. I figure it’s good skill development for the older one to get a feel for how your body affects a bike. Out of the box, the Mundo was pretty easy to put together and came 85% assembled. I have limited experience with disc brakes so I did take it in to a bike shop (as is recommended) to be tweaked. Part of the fun, I have discovered, is taking this thing out. People LOVE it. You may even get a free service just so the mechanic can geek out on your bike.

And of course it was love at first ride for the kids. They get to ride up high with mom, and as such, we get to talk again! Part of the fun of bike riding for us is about connecting with the environment and each other… so that’s a huge bonus. We call it the adventure-mobile.

One of the best part about the Yuba is how easy it is to customize it to your needs. Instead of having to buy a new bike set-up every time your kid out grows the old solution, you can just pop the bike seat off and clip a set of tiny handle bars on. We ended up going with the monkey bar… a ring that encircles the back extension, a padded cushion up front and a baby seat out back. We were able to affix our old BoBike front seat since my husband is handy… but if I had it to do over, I’d just buy the Maxi seat that goes with the Yuba.

For storage, we we use the Baguette panniers.  If you live in Vancouver, you appreciate waterproof. You also appreciate the tweed design. Cute but neutral. They also have to be the easiest panniers I have ever snapped on, hold a ton, and don’t interfere with my tiny travellers legs.

We did also buy the bread basket which sits independently of the handle bars and can hold 50 pounds – although so far we’ve found the panniers to be far more than enough space, even for a huge grocery run. As I alluded to earlier, this was my first experience with disc brakes and I really wouldn’t ride with calliper brakes carrying such important cargo again. Living in a rainforest, wet brake pads are about as much a given as rainy days. I also happen to live on a hill with a traffic light at the bottom. Even in the rain with two kids on the back, I never worry that I’m going to go screaming through the intersection now.

Though the bike itself performs very well, I’m really most impressed with the little details. It comes with a mounted light that recharges itself as you ride. I try not to cycle in the dark with kids, but I have been caught more than once with the sun coming down on us and this extra safety precaution makes me unbelievably happy. Little things right? Like the fact that the lock slides through the frame to lock the wheel and then goes away neatly into another little hole to store. You will never forget your lock and you can lock it anywhere. Which is great because although we have tons of bike lanes in this city, we lack racks to chain them to. You just pull up at the store and lock it. Done. And no lock rubbing your thighs on your seat post or taking up handlebar space. One of the problems with trying to get two kids on a bike could easily be trying to get the second child on without dumping the bike. I always wondered how people with both front and rear seats worked that. The Yuba has a double kickstand holding the bike up which is incredibly stable and allows you to easily get both kids on… or pull over to adjust coats or apply sunscreen. Another add-on I would highly recommend is the towing tray. It’s essentially a set of running boards that allow my older daughter to get onto the bike independently with a little notch cut out so that we can pony her bike along to the park. As I mentioned, we live on a fairly steep hill. Unless you’re raising Evil Kenevil, it’s not a great scenario for teaching a kid to ride a bike. With the towing tray, we just throw her bike on the back and ride to the park.  I was worried it might interfere with the wheel at first but thanks to how stable this ride is, I don’t even feel it back there.

I did opt for the regular old pedal powered bike… and had it to do over I would definitely get the electric assist. Even as an athlete, it’s tough pedalling up a mountain with two extra people weighing down the bike. The motor charges as you ride and you only need to kick it in when you need it: like when you’re passing people uphill with a loaded bike. But if you live anywhere with hills and plan on carrying a load, it’s a must in my books.

You can buy your own adventure-mobile or find a dealer near you at www.yubabikes.com Disclosure: I was given a discount when purchasing the Yuba Mundo, this is however not a paid post and all opinions and views on this post are 100% my own.