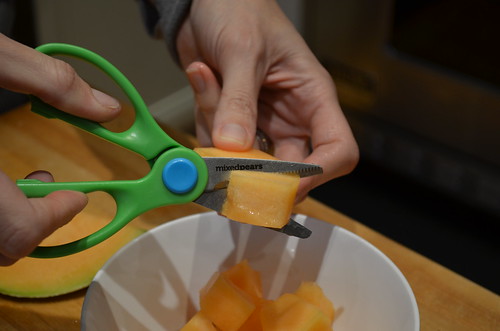 My baby loves grapes. And I mean loves them. She would eat dozens of them if we let her. They also happen to be one of the most common choking hazards for children under the age of 2. Since we did Baby Led Weaning this time around (no purees, just regular food right from the get-go) we have been giving grapes to her for quite some time. As per the recommendations, grapes need to be cut into quarters, only lengthwise. I can tell you that it is actually impossible to cut pretty much any fruit, especially grapes, while holding a cranky, hungry toddler.

Our friends at Mixed Pears who are also responsible for the adorable Suitables Role Play Bibs have introduced a very handy (pun intended) pair of food scissors. The BiteSizers have a lot going for them. They are free of BPAs, lead, phthalates, PVC and formaldehyde, which is important to this non-toxic mom. They are also the only baby food scissors to be certified food-safe by NSF International – a world leader in commercial standards for sanitation and testing. They also feature a built-in size guide that reminds caregivers exactly how small each piece should be (according to the American Academy of Pediatrics) and include a snap-on-cap to make travel easy and safe. While the scissors are quite small, the handles are actually approximately 90% the size of regular kitchen scissors, which means they are comfortable to use and not awkward and tiny.

I tried them out on some fruit (sadly we were out of grapes) as well as French toast. The scissors were quite sharp and made quick work of the cantaloupe even though I purposely cut it very thick to see just how good a job they would do. The scissors are advertised as being usable with one hand, but of course I think that totally depends on what you are cutting. The French toast was not a one hand job, but I would have needed two hands for a knife and fork as well and I find sometimes the toast tears and I can’t quite get the bite size pieces I’m looking for with a knife and fork. The scissors didn’t do that, which gives them the upper edge (yes, another intended pun!). The only downside to these scissors is that hand-washing is very strongly recommended. That being said, all of our chef’s knives must be hand-washed as well, so it isn’t a deal breaker for this mom. 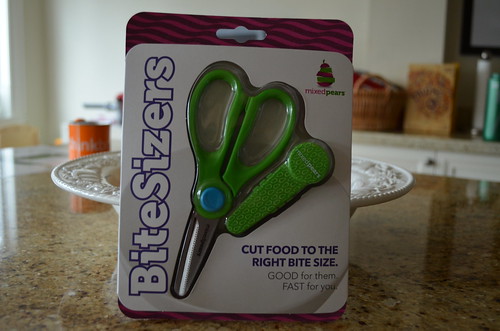 I fully intend on keeping these in the munchkin’s lunch bag for the time being, as I think I will get a ton of use out of them while we are out and about. The BiteSizers  come in three fun colours retail for $19.95 USD ($24.99 CDN) and are available online and at select retailers. I may also pick up a few extra pairs to give to friends for first birthday presents since, let’s face it, a one year old has no idea what you got them for their birthday, so why not make mom and dad’s life a little easier?

END_OF_DOCUMENT_TOKEN_TO_BE_REPLACED

« Previous PostMotherhood: No Sense of Time
Next Post » 8 Energy Busting Activities for in the House

Peloton Bike Review. Is it Worth It? (2 Year Review)