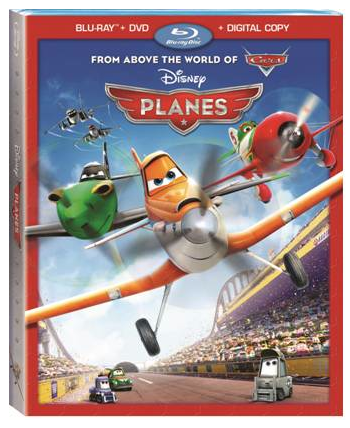 Available on Nov 19th, 2013 the Disney’s Planes Blu-ray Combo Pack would make a wonderful stocking stuffer for the entire family this holiday season!

Planes is a 3D computer-animated sports comedy film released by Walt Disney Pictures. It is a spin-off of Pixar’s Cars franchise and the first film in a planned Planes trilogy.

The Blu-ray Combo Packs features high definition picture and sound and some great never-before-seen bonus features. This movie is filled with bright colors, goofy voices, and slick animation that is fun and entertaining for kids and adults.

We received a copy of the movie and my 3-year-old-son had fun watching it, he is a big fan of Pixar’s Cars and he especially enjoyed the race scenes.

Disney’s Planes is a movie filled with action and adventure and a good message about having courage and inspiration to face your fears. I also enjoyed watching it and I definitively recommend it to any Pixar’s Cars fans.

One of our favourite bonus features on the Blu-Ray was the Franz’s Song featuring the German mini-car encouraging Dusty on his flight, a fun animated song.  We also enjoyed watching the deleted scenes.

Be sure to pick up a copy of Disney’s Planes for your family or as a holiday gift for a loved one. This is a great action movie that I highly recommend for all Disney and Pixar’s Cars fans.

Disclosure:  I received a sample of a product to facilitate this post.  All views and opinions stated on this post are 100% my own.