My toddler is obsessed with babies these days. Real babies and dolly babies – she doesn’t discriminate. We were given the new VTech Baby Amaze Sleep & Soothe Lullaby Doll to play with, and I had a feeling it would be a winner. It is her first doll that makes any noise so I thought it would be interesting to see how she interacted with it.

I like that the doll is very soft and light weight and came with an attached soother and detached blankie and rattle to play with. My kiddo likes shaking the rattle and trying to put the soother in the baby’s mouth, which is easy enough for her to do herself at just over two years old. I am not crazy about the voice on the doll (quite high pitched and a bit loud), but it is just like all the cartoon voices on t.v. and clearly geared to get the attention of a busy toddler. 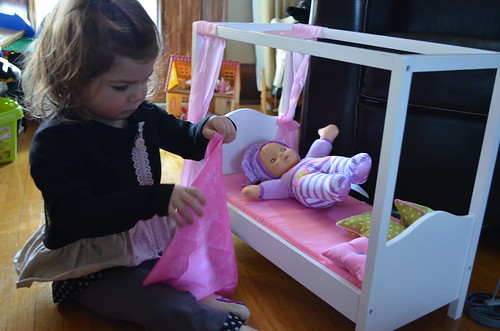 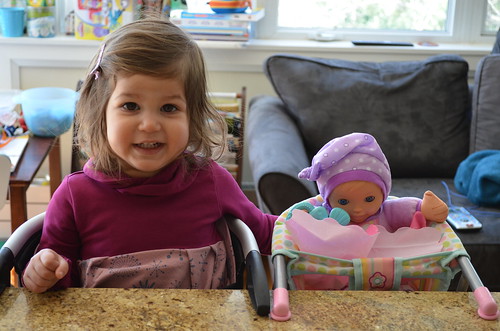 My daughter likes playing with the doll and pushes her around in her stroller and lays her down for sleep time as well. She even asked to take her along for a ride to pick up her brother at school and just held her the entire time. The only issue I have encountered with the doll is that the eyes open when the doll is upright and close when she is lying down but I have noticed that after a very short time, one of the eyes doesn’t always open all the way when she is sitting up, and I was a bit surprised to see that happening already.

Overall, I think this doll is a nice option for an inexpensive doll that has some added fun features and accessories. The doll also has over 50 songs, melodies, sounds and phrases pre-programmed, so you don’t have to listen to the same song or words over and over again. Plus, unlike some electronic toys we have, this one does not talk or make noise when your child is done playing with it to try to grab their attention again (a minute later usually). If you have ever been scared out of your pants by a toy making a loud noise when it is not being played with, you will value this feature immensely!

The VTech Sleep and Soothe Lullaby Doll is geared for ages 2 and up retails for $24.99 CDN. It is available at major retailers as well as online. If you are in the market for a baby doll that has some nice added features, this might be the one you’re looking for! 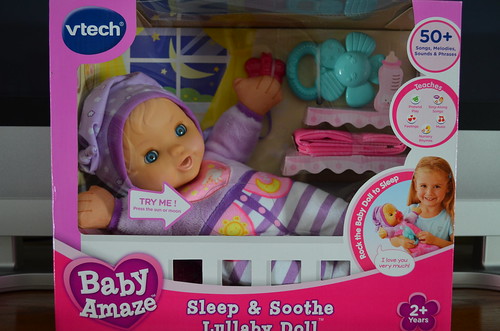 Disclosure: This is a partnered post with VTech. A product sample has been received for this review, however all opinions and views on this post are 100% my own.