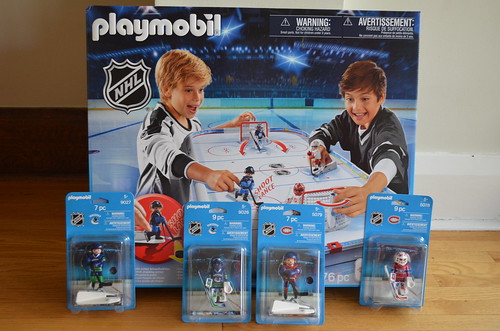 My son loves hockey. He comes by it honestly as both my husband and I played hockey and the husband is a huge fan of the NHL© and supports not one, but two teams with true love and adoration. The kid attended his first game when he was two and started playing at age four. He now plays competitively at age 7 and that can up be to five days a week! Needless to say, we have a lot of hockey and hockey-related items in this house. Mini sticks galore, hockey cards, a hockey table and even hockey themed LEGO-style building sets.

At his last birthday my poor deprived child begged and pleaded for the new Playmobil Arena but I put my foot down and said absolutely not. I recently had the opportunity to review the arena and of course, in a moment of classic mean mommy-guilt, I jumped at the chance. When the box arrived he saw the word arena and he knew. It was more electric than Christmas morning. True story. He was vibrating he was so excited. Not only that, but when he tore it open and discovered there were players (and goalies) from his two favourite teams he was literally beside himself. 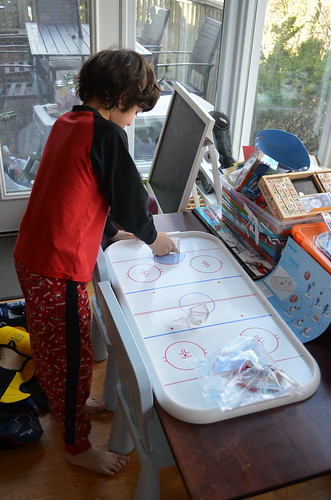 In true wordless IKEA fashion the instructions for the assembly were basically nonexistent. That being said, we managed to figure it out. It did take some time with some tiny connection pieces and a lot of stickering but it was not unreasonable. Once we had it organized it was game on. Literally. My son has been playing with anybody and everybody who has entered this house, including his aunt who was visiting from Vancouver. The players are quite easy to maneuver and the puck really flies. You need to be prepared to have the puck go flying off the “ice” multiple times a game, but if you just play on the floor it wouldn’t be a big deal.

Many of the pieces could be choking hazards so this would not be appropriate for the under 3 set and I think the manual dexterity needed to move the players and control the goalie would actually make this best for children over 4 to avoid frustration. The ability to customize the set with your favourite teams or your favourite team and their arch nemesis is a antastic option. I think that this toy will actually have longevity in this household and it is most definitely a keeper. 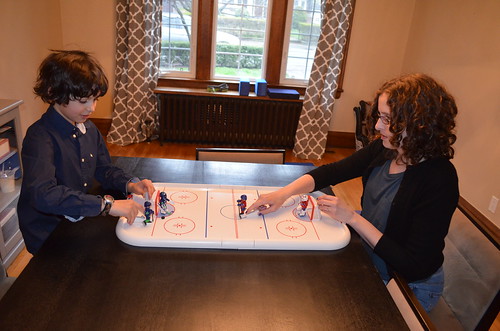 The Playmobil NHL© Arena retails for approximately $69.99 CDN and the players run in the neighbourhood of $8.99 CDN and are available at major retailers and online.  If you are a hockey household like ours and are looking for a hockey table that won’t take up a huge amount of real estate this is a fantastic option. With a higher price point this would also make a fantastic birthday or special celebration gift for your favourite hockey fan.